Being Adaptable Helps you Hit the Curveballs Life Pitches 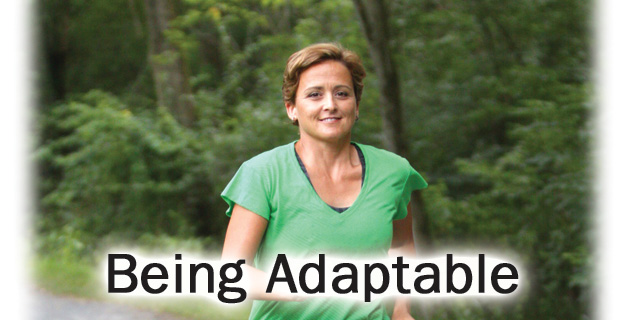 Your life will see a lot of changes over the next few years – many you are planning on, and some that you’re not. After high school you might head off to college or join the military. Your friends might move to different cities, and you’ll have a chance to make new ones. Your future holds exciting adventures, and probably a few unexpected setbacks.

Janet Oberholtzer, an author who lives near Mohnton, Pa., has led a life full of changes. She was raised to follow a strict form of the Mennonite faith. Her family had electricity and drove cars, but used few other modern conveniences. As a young woman she married a Mennonite man who shared her desire to live a different life.

“The world is a big place, and I wanted to explore it,” Oberholtzer says. “We wanted to do more. We wanted to have basic things like TV, and to wear jeans.”

In an instant
Then in 2004, Oberholtzer, her husband and three sons were driving across the country when their motor home was hit during a six-vehicle accident. She awoke 12 days later in a hospital to see a big chunk of her left leg missing.

Oberholtzer also had a punctured lung and shattered pelvis. More than two-thirds of the skin and tissue between her left knee and ankle was gone. After many surgeries, she walked with help about three months after the crash. She was able to run again in 2008 and took part in a marathon in 2012.

“I realized that life was going to go by whether I was living it or not,” says Oberholtzer, author of the memoir “Because I Can: Doing what I can, with what I have, where I am.”

It can be scary when your life doesn’t go as planned. But it’s bound to happen sometime. Maybe you won’t get accepted to your dream college. Maybe you’ll change your mind about what you want to do after you graduate. That’s OK.

Meeting the unexpected
Sheri Gazitt, a teen life coach in Redmond, Wash., emphasizes that you shouldn’t give up on your dreams if something changes on your way there.

“Failure or a change in plans is just a stepping stone to something better,” Gazitt says. “There is more than one path to a goal.”

Your life will change in many ways once you leave high school. Of those who go on to college, some figures say that 80 percent switch their majors at least once. Balancing classes, work, extracurricular activities and free time is a lot harder in college than in high school. To be a successful college student, it’s important to be open-minded, willing to try new things and adaptable to change.

“It’s OK to change your mind,” says Chip Parker, director of retention at Drury University in Springfield, Mo. “There are definitely many opportunities that will come your way.”

Oberholtzer adds that coping with change means trusting yourself. Remember that it doesn’t matter what other people think of your choices as long as they’re right for you, she says.

At the same time, she says, it’s important to allow others to make choices for themselves. Oberholtzer still gets along with her relatives and respects their religious beliefs. “I don’t discount what they do or try to change who they are,” she says. Taking big steps can be frightening, but it gets easier to cope with change the more you do it, according to Oberholtzer.

“Every time I push forward, I’m always glad I did,” she says.

SIDEBAR: How to become more adaptable

Do you want to get better at facing change? Take these bits of advice from the experts: