COASTing into the Future 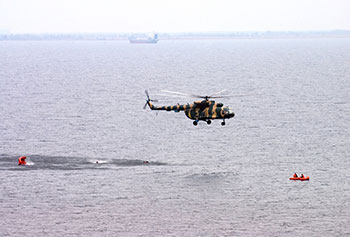 If you want to serve your country in extraordinary ways, consider the U.S. Coast Guard. As the nation’s oldest continuous seagoing service, the Coast Guard serves the country in unique ways compared to the other branches of the U.S. Armed Forces. The Coast Guard may be the smallest military branch, but its missions affect people every day.

Electronics Technician (ET) John Beacham, a Coast Guard recruiter from Birmingham, Ala., said, “The Coast Guard differs from other branches because our roles and missions are not as focused on warfare but on humanitarian tasks.”

Falling under the jurisdiction of the Department of Homeland Security, the Coast Guard’s missions are a mix of military, law-enforcement, and civilian activities. The Coast Guard has five fundamental missions: maritime safety, maritime security, maritime mobility, national defense, and protection of natural resources.

The Coast Guard is known for ensuring the safety of transportation, fishing, and recreational vehicles through search and rescue missions. But they do much more than that.

The Coast Guard protects our borders from illegal drugs, contraband, and aliens. The Coast Guard can also be called to protect the nation during times of war.

“You could be called anywhere in the country, even out of the country, depending on the mission and the needs of the Coast Guard,” said Beacham.

The national resource missions of the Coast Guard were brought into the spotlight following BP’s oil spill in the Gulf of Mexico in April. The Coast Guard played a crucial role in assisting with the clean up, and currently supports the Bureau of Ocean Energy Management, Regulation and Enforcement with inspecting and regulating oil rigs throughout U.S. waters.

The Coast Guard also helps clean up pollutants in rivers and waterways, and supports scientists in studying the effects of human activity, like climate change, on the environment.

Those looking for jobs that practically serve the country can’t go wrong with any Coast Guard mission. “In some parts of the military you train for a job you never do. But in the Coast Guard, you have a specific job that you do as you train for that job,” said Lt. James McKnight, stationed in Mobile, Ala. “It’s a very fulfilling job.”

Plus, jobs performed in the Coast Guard are valuable outside the service as well. “Coast Guard jobs are very marketable if you choose to go into the private sector. It’s tougher to market other military jobs, like tank driving,” said McKnight.

Many in the Coast Guard never worry about how their skills will transfer, though, as the Coast Guard makes a good career for those who stick with it. “There’s a lot of job security, which is important with the economy the way it is,” said Beacham. “Plus, there are medical benefits, full retirement benefits after 20 years of service, and educational benefits such as tuition assistance to go to college.”

Those who want to begin a career right away can enlist after graduating high school. Enlistment involves an application, prescreening, physical and medical tests, and eight weeks of basic training before getting an assignment.

If more interested in becoming an officer and getting a college degree, as well, students might consider applying to the Coast Guard Academy in New London, Conn. Following the four-year course, graduates are commissioned as an ensign (or junior officer) and required to serve five years in the service. Another option for commission is the Officer Candidate School, a 17-week course that requires three years of service following completion.

Whatever the mission, from saving stranded boaters to patrolling U.S. fishing waters to breaking ice in the arctic for safe passage of vessels to protecting marine wildlife from poachers, the Coast Guard serves the country every day by fulfilling vital roles.