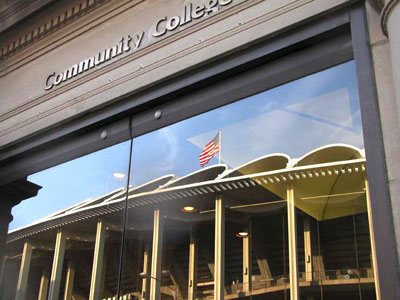 When he was a senior at Coon Rapids (Minn.) High School, Rob Eilreich heard all the stereotypes about community colleges.

You probably know about them, too. A common one: Community colleges are glorified high schools for students who aren’t smart enough to make it at four-year colleges. Eilreich, an honor-roll student, heard those kinds of generalizations.

Thankfully, he ignored them. Life at a community college, specifically, Anoka-Ramsey Community College in Coon Rapids, went very well for the aspiring chiropractor.

“A lot of people look down on community colleges, but I don’t think they are that different from four-year colleges in terms of academics,” said Eilreich. “Quite a few of my teachers have spent time teaching at larger schools like the University of Minnesota.”

Eilreich is among a number of students deciding to attend a community college out of high school. Community college life offers these students a chance to adapt to college, receive inexpensive tuition and take advantage of opportunities to meet people through on-campus activities.

Like many students, Courtney Scheel wasn’t sure where she wanted to go to college or what she wanted to study when she graduated last spring from Hillcrest Lutheran Academy.

Now a first-year student at Fergus Falls Community College, Scheel has picked up some college credits and has a better idea of her future plans. She’d like to major in elementary education and is leaning toward transferring to Arizona State University after next year.

“I’m keeping my options open,” Scheel said. “I’ve still got some time to think about it, which is kind of nice.”

Eilreich, on the other hand, attended community college knowing that he wanted to become a chiropractor. It turned out that going to community college and later transferring to a four-year college, or possibly a specialty school for chiropractic students, was his best option.

Community colleges are primarily known for giving students the opportunity to build up on core education classes, like English, math and psychology, that transfer to all public four-year colleges and many private four-year schools in the state.

Eilreich plans to transfer next fall either to the University of Minnesota to get a bachelor’s degree in nutrition or straight to Northwestern College of Chiropractic in Bloomington, Minn., and get his master’s degree within three years.

“The science program at Anoka-Ramsey is very strong and I feel like I’ll be very prepared for when I transfer,” Eilreich said.

Caution: Students thinking of attending community college and then transferring should know that the process requires diligent preparation. Community colleges have counselors who help students with transfer issues. Use them and don’t be left out in the cold!

Show me the money

Did we mention that you can save some big bucks by attending a community college?

“Going to community college is a good way of saving a lot of money,” Scheel said. “It was definitely one of the main reasons I chose to attend one.”

Most community colleges also offer dozens of scholarships from a variety of sources just like you’d find at a four-year college.

Many people think social opportunities at community colleges - almost all of which are commuter schools with no on-campus living - must be few and far between.

Not necessarily true, Eilreich said. While the lack of student residences on campus does make it harder to meet new people, it is not impossible.

“It’s definitely easier to find things to do on campus at the four-year schools I’ve visited,” he said. “It’s more up to the student to get involved at a community college. There are some really good leadership opportunities on two-year campuses.”

The key to meeting people at a community college is to join an on-campus club or two, said Eilreich, who was the treasurer of the 20-member student senate and an active member of Phi Theta Kappa, a national honor society for community college students.

Scheel has met other students through classes, an on-campus job and school dances. She also played volleyball this past winter for Fergus Falls’ intercollegiate team, which competes against other community colleges from northern Minnesota.

“I doubt that I would have been able to play volleyball at a larger school,” Scheel said. “It was really fun playing this year and a lot of the people I’ve met on campus are on the team.”

“It’s easy to learn and stay focused at a community college,” Eilreich said. “If the students don’t learn anything, it doesn’t matter where they’re at. You can go to Harvard and it won’t matter if you aren’t learning anything.”