The Truth about Cutting 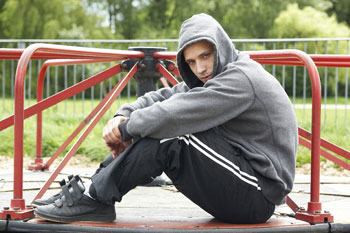 "I just feel so out of control sometimes. There is so much pain, and I just need a release.” These are the words of Jason (name changed to protect identity ), a 16-year-old sophomore from a rural town outside of Boise, Idaho. Hiding his arms in the sleeves of a large zippered hoodie, Jason is a cutter. “I’m not trying to kill myself or get attention. I hide my arms so no one sees (the cuts). I don’t think my parents know I do this, but one of my friends does. I’m embarrassed that I do this, but I don’t know how else to feel better.” About cutting

The reasons a teen cuts or engages in other forms of self-injury are numerous, but the most common motivation is that the individual wants to regulate his or her emotions.

For example, a teen may cut because she wants to control uncomfortable feelings, or wants to “feel something” if in a constantly depressed state. Other reasons a teen may injure his body include self-punishment, to show emotional pain, and to have a distraction from difficult feelings or memories.

Monica (name changed to protect identity ), a high school junior who lives outside of Portland, Ore., gets relatively good grades, taught herself to play the guitar and recently broke-up with her boyfriend. Monica’s scars are not on her wrists, which is not unusual for a cutter. She began cutting while she was in an abusive relationship with her ex-boyfriend.

“He only used me for my body, and would get mad at me when I didn’t do what he wanted me to do. I started to cut while we dated because I thought I was a bad person, which I know is not true now. But it felt true at the time; I couldn’t stop hurting myself after we broke-up. I am so afraid of getting hurt again, and I cut (myself) when I start to have bad memories and feel scared.”

Cutting is an issue that is hard for some teens to talk about, and it may be hard for friends and family to understand why a teen may self-injure. The lack of communication about cutting can lead to harmful myths about the issue:

If you are a cutter, it is important to realize that it is okay to feel intense, negative emotions and that there is help and hope. You have the power to use healthy ways to deal with your pain and end this dangerous cycle, and deciding to stop hurting yourself is the first step towards helping yourself.

Follow up your decision to stop by talking to someone you trust, finding out why you cut and using healthy, productive ways to cope when life feels out of control.