Turning up the Heat 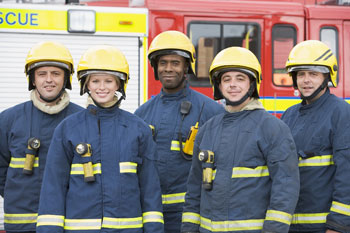 Firefighting is a job where you can make a real difference. From rescuing people to protecting the community to saving lives, firefighters risk their own lives for the good of everybody else.

The hours are long, the work is backbreaking, and the pay is low, but the rewards are many. Many firefighters choose the career out of a desire to serve their community.

Initial qualifications for firefighting are minimal: be at least 18 years old; have a high school diploma and driver’s license; and pass written, medical and physical tests. Meeting these requirements, a recruit is ready for training, which lasts many months and is ongoing the rest of one’s career.

“We typically hire from within, so everybody has some experience fighting fires,” Brent said.

City, or structural, firefighters comprise one set of careers, but for those looking to get away from the city and into the forest, wildland firefighting might be a good choice.

Students looking for more training in firefighting and natural resources might consider a program like Itasca Community College’s wildland firefighting program in Grand Rapids, Minn., which has one- and two-year degree options. Students who complete the program are well-prepared for a lifelong career of protecting the nation’s natural resources.

“It’s a wonderful job if you like being outside, working with your hands, and living in some of the most beautiful parts of the country,” Marty Christensen, an instructor at Itasca, said.

In many places around the country full-time firefighting careers are hard to come by. That’s why many people who want to serve and protect their community become volunteer firefighters.

Lt. Peter Hullinger, 36, became a volunteer firefighter at age 19, and only recently transitioned to full-time firefighting.

“It’s a very exciting career, and I’m doing things I never thought I’d do,” Hullinger said. “Every run gets in your memory. It’s very fulfilling to help people you know in your community.”

The life of a firefighter is tough, especially once one settles down with a family.

“When I’m home with my family and kids I try to make it quality time,” Hullinger said. “You never know when you will have to leave.”